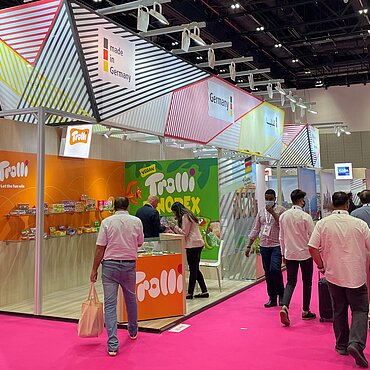 The German Federal Ministry of Agriculture and Food (BMEL) has announced that the foreign trade fair program for 2023 has now been finalized.

At the request of German Sweets, both ISM Middle East in Dubai and the new ISM Japan in Tokyo have been included in the federal government's trade fair funding. The BMEL's trade fair program promotes joint company stands under the umbrella of an official German pavilion at important food trade fairs worldwide. The joint appearance under the quality promise "Made in Germany" gives the exhibiting companies greater appeal.

In addition to the confectionery trade fairs, numerous interesting food trade fairs will again be promoted in 2023 at the request of the association GEFA e.V., e.g. Anufood Brazil, Sial China, Food & Hotel Vietnam or PLMA in Amsterdam.

Statistics cookies are used for analysis and help us understand how visitors interact with our website by collecting information anonymously. Based on this information, we can further improve and optimize our website for you.

Purpose: Used by Matomo to store some details about the user, e.g. the unique visitor ID.

Expiration Time: Usually the cookie will be deleted by closing your browser